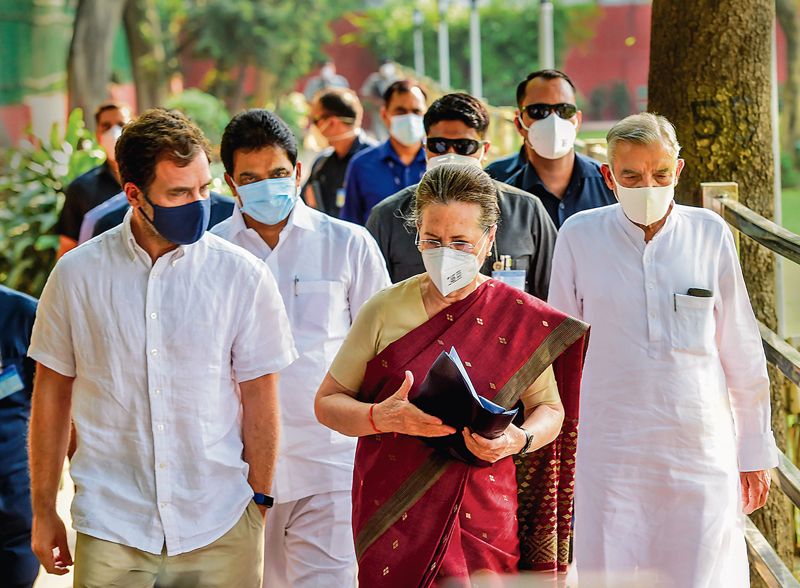 LANGUAGE and time have the gift of transforming politics and politicians in surprising ways. Consider Modi. Eight years of rule gave him a sense of gravity; he graduated from an RSS pracharak to a BJP Pradhan Mantri. Time has made Modi the archetype of a new statesman, a leader who taps into the unconscious of a people to create new constituencies.

While the BJP is built around the rapacity of nation-state, Congress must seek a comprehensive civilizational framework.

There is a feeling of magic around him. Even his sense of the ordinary evokes the idea of ​​chaiwala. When the press looks at the banality of Rahul Gandhi, it sees mediocrity in it. Modi is a leader who is seen as standing tall among world leaders, satisfying India’s supposed need for dignity and self-respect. Time tells it is here to stay and the BJP will shape the political ecology of the next decade. We don’t need a Prashant Kishor to tell us that.

The picture presented by Congress is radically different. Even a sense of nostalgia is lost as Rahul begins to embody the comical and the helpless. His performances seem laughable, while Modi conjures up the laudable predictability. Modi, for the media, evokes a new epic, while Rahul Gandhi, at best, summons the limerick.

A writer fed on the myths of Congress, committed to pluralism, faces such a situation with a feeling of anguish and anxiety. Yet he senses that what looks like a big party is a monolingual chant, the creeping rhetoric of gentle authoritarianism. The question is how to reinvent Congress in a time like this. One thing is clear, we can not resort to the trick of reviving the family.

We feel that we need a new discourse and another type of storyteller. Congress needs to recreate its big picture. It must revive a plural and syncretic vision of India as our current sense of patriotism becomes a monolingual catechism. Following the performance of 300 Ramayanas by AK Ramanujan, we have to invent 300 Congress narratives that converge to create a richer whole.

It must challenge BJP globalism, ending parochialism with civilizational-type cosmopolitanism. Rahul’s attack on IFS and his arrogance in a series of mumbles won’t be enough. Congress must show that the BJP speaks of a narrow India, both in its foreign and domestic policies, that it is a mediocrity of textbook ideas that lacks the innocence and generosity of the Nehruvian years . It must show how Nehruvianism provides a heuristic for world politics, that it is not an intellectual corset of the past.

To do this, he must reconstruct the vocabularies of the past. Scientist CV Seshadari playfully asserted that the India of his time needed a “don’t use me dictionary”. It was a collection of political terms like development, poverty, security, borders. Seshadari argued that all the words needed to be reworked, to be reused. Language, he asserted, was an essential element of ethical reparation.

We must realize that by reviving the debates, we revive the models of democracy. We cannot rely on the old grids of electoral democracy based on the dogma of the electoralism of numbers and representation. Congress must revive the immediacy of direct democracy, as the “Occupy” movement has done around the world.

An electoralism of numbers leads to a tyranny of majoritarianism which, in turn, polices minorities in the name of patriotism. This idea of ​​the obsolete nature of minority politics was aptly formulated by an academic at a recent seminar. He said: ‘I don’t want to be a minority, watched for good behavior. I want to be a citizen to celebrate India as a whole.

The idea of ​​powerlessness, of marginalization in an informal economy that Congress has created as a vote bank needs to be radically reworked. The marginalized must be seen as part of a creative plurality, as the indigenization movements in Latin America do. The marginalized must be part of an alternative imaginary that challenges the monolingualism of economic planning. Congress’s sycophancy over textbook economy must be challenged if the poor are to be freed from poverty. Likewise, the tribal must be seen as an expert in diversity, as a constitutional administrator of the forest where they can rethink the tree and the leaf within the framework of the new constitutionalism. Also, the Dalit idea needs a Dalit idea of ​​science, waste, pollution. We must go beyond pollution to create a new mix of hygiene and justice. Only if Congress gains a sense of the dialects of vulnerabilities can it reclaim a sense of the idea of ​​inequality and how to fight it. It must abandon the idea of ​​a scientific temperament and replace it with a pluralistic link between knowledge and democracy. It needs a global radicalism of the Anthropocene, and must abandon the current idea of ​​development that turns citizens into refugees. Dams and the Lab can only become temples if they create a syncretic science of sustainability rather than a monolingualism of a BJP model of nationalism and development.

To do this, Congress, which used universities as a bank of votes, must relaunch the idea of ​​an alternative university. He must think of a university of ideas that is dialogical, non-developmental, where dissent does not crucify a promising career. The Congress, by reworking itself, must rework the syllabus and the Constitution by rethinking a new idea of ​​the commons.

As the BJP builds around the rapacity of the nation-state, Congress must seek an overarching civilizational framework. It needs to come back to civil society to get ideas, create panchayats of knowledge that create politics of togetherness. It needs a new ecology where nature is part of the Constitution, where technology is embraced as ethics. Only by turning politics into an invigorating exercise can Congress assert itself as the future of a new democratic imaginary. No G-23 will do that.