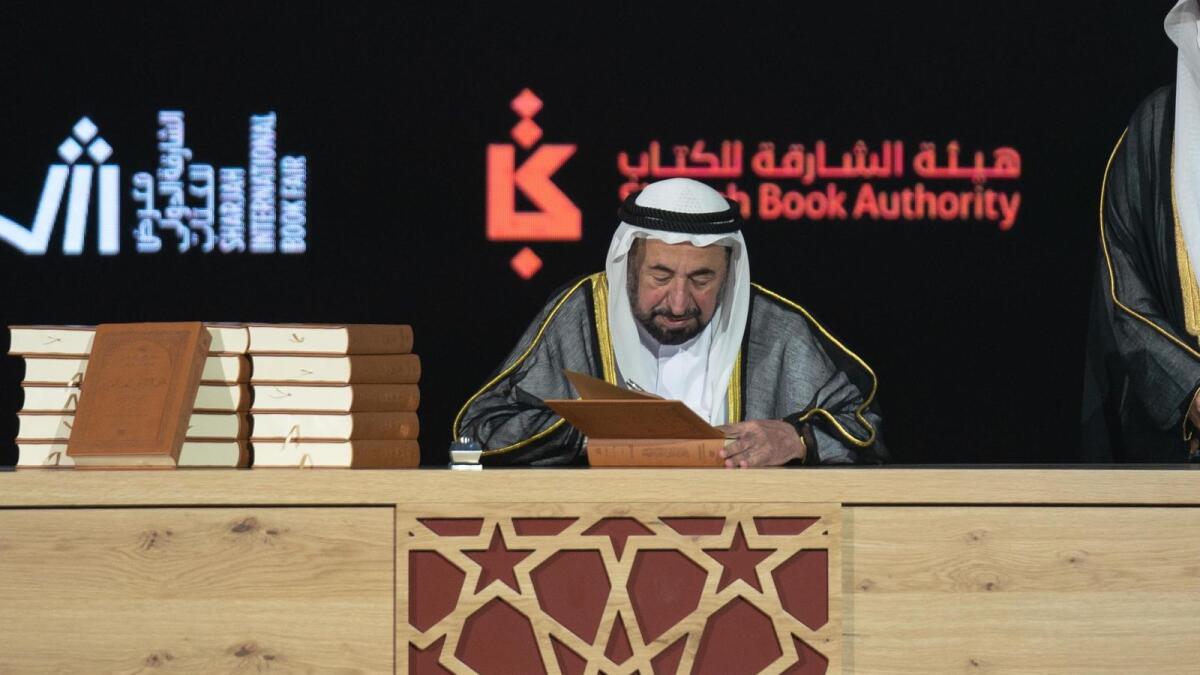 The dictionary will be available on a dedicated website and app.

His Highness Dr Sheikh Sultan bin Muhammad Al Qasimi, Member of the Supreme Council, Ruler of Sharjah and President of the Academy of Arabic Language in Sharjah, today launched the first 17 volumes of the ‘Historical Dictionary of the Arabic Language’ ‘, during the opening of the 40th edition of the Sharjah International Book Fair (SIBF), organized by the Sharjah Book Authority (SBA) at the Expo Center Sharjah.

Sheikh Sultan bin Ahmed Al Qasimi, deputy governor of Sharjah, was also present at the launching ceremony of the dictionary, the largest Arabic linguistic knowledge and information project that documents the history of lexicons of the Arabic language and their transformations from ‘usage over the past 17 centuries (Pre-Islamic to the present day).

The dictionary not only provides the history, origins, meanings and explanations of the words, but also documents the history of the nation, preserves its civilization, and celebrates the achievements of the Arabs. It describes words, the definition of the semantics of words according to their historical contexts and their etymology.

Sheikh Sultan also announced that the dictionary will be available on a dedicated website and app.

In a keynote address, the ruler of Sharjah noted: â€œArabic is one of the oldest living languages. We are here to celebrate the Arabic language experts who have come together to work for years to document the roots and meanings of the Arabic language alphabet. We started to work hard and fill in the gaps that existed in the documentation of the language. Finally, the sun has risen on this magnificent Corpus, the fruit of the efforts of several Arabic language institutions across the region.

â€œThe role this detailed corpus will play in informing and educating students, researchers, linguists and even everyday language enthusiasts will be immense. I am not exaggerating when I say that there has not been another project that has caught my attention or the attention of the Arab linguistic community in our region as far as this project has. I am monitoring the progress of the efforts of everyone involved in this project, and I assure you that in the years to come we will be publishing several more volumes. I thank everyone involved in the success of this project, â€added His Highness.

Sheikh Sultan also signed the first edition of the Historical Corpus of the Arabic Language during the opening ceremony of SIBF 2021.

The first volumes of the corpus are devoted to the first five Arabic letters: the hamza (Ø¡), ba (Ø¨), ta (Øª) tha (Ø«) and jeem (Ø¬) and describe their evolution throughout the pre-Islamic period, l Islamic Era from AH 1 to AH 132, the Abbasid Caliphate from AH 133 to AH 656 and the Modern Era from AH 1214 to date.

The website will offer academics, linguists, researchers and language enthusiasts access to the 17 volumes of the corpus from anywhere in the world. The website also has a section that hosts a bibliography of the books that were consulted to write the first volumes of the Historical Corpus, and lists the names of editors, linguists, and experts from the 10 Arabic-language academies across the Arab world. who collaborated on the project.

The digital platform that was created to access the Historical Corpus of the Arabic Language online is easy to use and can quickly filter search results in historical contexts. In addition, it has optical recognition software (OCR) that converts written texts into spoken words.

The corpus saw the collaboration of hundreds of researchers and senior linguists, editors and experts from 10 Arabic language academies across the Arab world, under the supervision of the Union of Arabic Scientific Language Academies in Cairo, in Egypt, and together with the Arabic Language Academy in Sharjah manages the executive committee of the project. The corpus is based on a database of sources collected and digitized over the past four years, including 20,000 books, manuscripts, sources and historical Arabic documents, including ancient inscriptions and archaeological finds, dating back to the 3rd century BC. Islam.

It traces the history of a given word and identifies the first user and the evolution of that word from pre-Islamic Arabia to modern times. In this regard, it is different from any other dictionary as it cites vibrant quotes from the Holy Quran and Hadiths as well as poems, speeches, letters and other sources.

It also reveals the evolution of Arabic idioms and expressions through the centuries, and documents the entry of new words into the Arabic language, lists words that are no longer in use, and explains the reasons. In addition, the corpus reviews the development of the arts and sciences directly related to linguistics, including grammar, morphology, philology, phonetics, rhetoric, rhyme, etc.

The corpus also offers comparative lexical reviews on Arabic and the influence it had on other Semitic languages â€‹â€‹such as Hebrew, Akkadian, Syriac, Abyssinian and Amharic. An expert committee highlighted the similarities and differences between Arabic words and equivalent words in these languages, citing examples and documenting the bibliography and reference books that were used in the project.