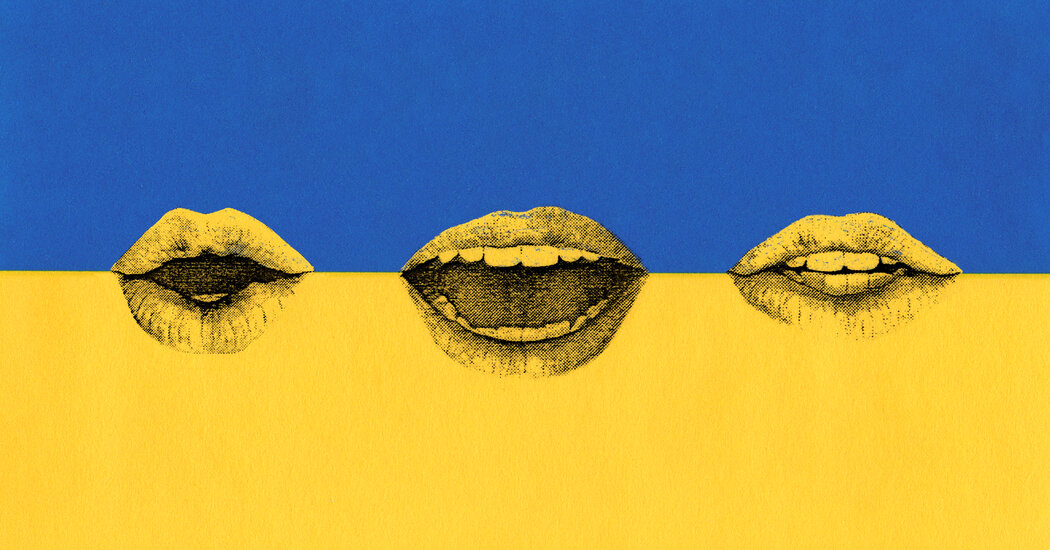 The war in Ukraine sparked a new word

When we say “Russia”, the double “s” is pronounced “sh”. In the middle of “fascism” we find the same sound, “sh” – although this time it is generated by “sc”, which English borrows from the original Italian “fascismo”. We can render this sound with ‘sh’ or, in these two words, ‘ss’ and ‘sc’, but very simple Ukrainian spelling picks up this sound from any language and renders it as ‘ø. ” So “раша” + “фашизм” = “рашизм”, also thanks to this middle sound. The “sh” sound in the middle, the “ø”, refers to both Russia and fascism, but only because Ukrainians play with English. Neither in Russian nor in Ukrainian does the word “Russian” have the sound “sh”.

“Pашизм” relies on English to function, but it’s not easy for English to reclaim. When ‘Russia’ becomes ‘Pаша’, the vowels firm up and become more honest; they are no longer completely compliant with English. The same goes for “ism”, which in Ukrainian requires a more cut and disciplined sound. These honest vowels make it difficult for English speakers to pronounce “pашизм” as it’s supposed to be pronounced – and even if we were to pronounce it correctly in Ukrainian, it wouldn’t sound like anything in English.

That’s why, to claim “pашизм” for English, I have to transliterate it – as Ukrainians usually do – as “ruscism”. The mechanically correct transcription would be “rashysm”, which is unclear. We have to go back and get the “u” to indicate Russia, and we take the “ism” because we know it’s ideology. And while the Ukrainian consonant “ш” requires an “sh,” the resulting “rush” would suggest a weakness for American talk radio or Canadian classic rock. We know that “ø” doesn’t actually come from an “sh” in the first place; he came from both the “ss” of Russia and the “sc” of fascism. We choose “sc” and get “ruscism”. As in Ukrainian, a “sh” sound connects the two parts. But now in English the visible “sc” is reminiscent of the unusual spelling of fascismLike it should be.

In English, if you believe in racism, you are a racist; if you believe in fascism, you are a fascist. This lexical progression is similar in Ukrainian. “Расизм”, racism, has the associated personal form “расист”, racist. “Фашизм”, fascism, gives “фашист”, fascist. Similarly, the new word “рашизм” has “рашист”, or ruscist. (Unlike English, Ukrainian also generates feminine forms of these words.) Ukrainians sometimes refer to Russians as “Ruscists”, for example listing prominent Russian war supporters. But there is also the tendency to label all Russian soldiers in Ukraine as “Ruscists”. This comes up against certain difficulties: given the imperial character of the Russian state, a very high proportion of Russian soldiers in Ukraine belong to national minorities. This suggests a deeper problem, which is that even soldiers who die for a fascist cause need not be fascists themselves.

While Russian leaders intensified the Soviet tradition of calling contemporary enemies “fascists,” in Ukraine the word more simply refers to the horrors of World War II, which were even deeper there than in Russia. When Ukrainians speak of “Ruscism”, they accuse Russians of a profound betrayal of what should have been a common heritage and a common memory. They accuse the Russians of becoming what should have been defeated long ago.

Little beyond Ukraine seem to know that millions of Ukrainians, exercising freedom of expression in a country that allows it, have coined and are deploying a new word. “Ruscism” will seem strange at first glance. Just like ‘genocide’ and ‘ethnic cleansing’, other words that emerged from the wars in (Eastern) Europe. The concepts that clarify our world today were once strange and new. But when they point at something, they can grab it.

Russian fascism is certainly a phenomenon that requires a concept. The Russian Federation promotes the extreme right everywhere. Putin is the idol of white supremacists around the world. Prominent Russian fascists have access to mass media during wars, including this one. Members of the Russian elite, especially Putin himself, are increasingly relying on fascist concepts. Putin’s very justification of the war in Ukraine as an act of purifying violence that will bring Russia back to itself represents a Christian form of fascism. The recent publication, in an official Russian information service, of what I consider to be an openly genocidal manual, providing a plan for the elimination of the Ukrainian nation as such, confirms all this. Moscow is the center of fascism in our world.

How to Get a Debt Consolidation Loan for Bad Credit